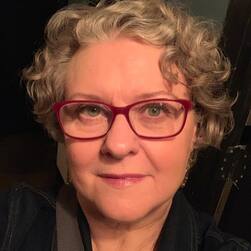 Mary Blackford earned a BA in English Literature from U.C. Davis and an MA in English from California State University Sacramento. She has been a classroom instructor, individual consultant, and tutor for 30 years, and has been an instructor at the University of Phoenix since 1998 and Delta College since 2006. She is/was currently a part-time English instructor, play and screenplay writer, and is/was writing a book about writing and grammar. In 2006, she earned second place in the 3rd Annual Stockton Civic Theatre’s play competition with her one-act play, Wings, which also won Top 50 and an Honorable Mention in the 2006 International FilmMaker Magazine / American Gems Short Script Competition (out of 1200). She adapted the novel Dog Soldiers to a feature-length screenplay, and has several other writing projects in various stages of completion. Ms. B loves to read, garden, and dance. She has one husband, two teenagers, eight chickens, and two dogs.